A calligraphy of this Tibetan mantre was placed over Allen Ginsberg's shrine at the time of his death.

There was an auction of possessions of Allen Ginsberg in Sotheby's, Manhattan on October 7th, 1999. Between Session one and two of the auction, I was sitting near four men who were insiders in Allen Ginsberg's world and knowledgeable about the auction. Their conversations ranged from whether certain items had been priced correctly, to shop owners who snatched up items to resell at higher prices, to how many more photos there were that could have been sold. I heard not one word about poetry or about death. Always they spoke as though Allen Ginsberg were still alive. They talked with a light spirit and were certain that they didn't want any items returned unsold. They seemed to feel that Ginsberg was part of the action, laughing along with them. At the same time these were businessmen calculating worth in terms of money. I've always been offended by the phrase "He's worth $$$$." 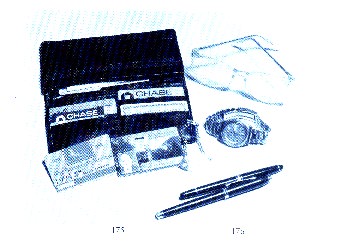 The auction reminded me of relatives fighting over their 'loved one's' material possessions. Seems as though there is so often a battle which I've seen as a struggle in letting go, rather than a materialism or greediness or selfishness. I've thought of it as a desperate attempt to keep the person alive through possessions, as well as an announcement regarding the existence of the close relationship. Often when a person is still alive, the relatives' dance of ownership and claiming begins. I was thinking along these lines during the auction when I watched the bidding on the personal items of Allen Ginsberg. At first I felt that it was sad that personal items of Allen Ginsberg weren't treasured and kept by his friends, and then I considered that perhaps I was seeing buddhism in action. Was I too idealistic, were his friends free from attachment and simply preferring hard cash over the objects that Ginsberg had used and treasured.


...Who broke down crying in white gymnasiuums naked and trembling before the machinery of other skeletons... 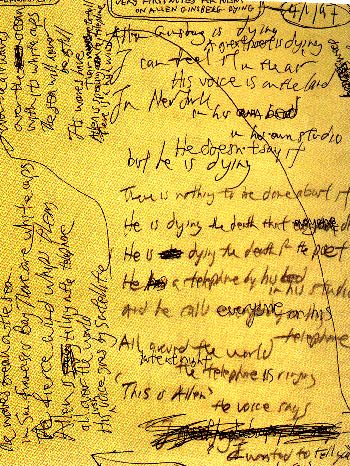 Lawrence Ferlinghetti had a scribbled draft of a poem he wrote about Ginsberg's death. How powerful the words! This poetry spoke loudest to me of all I saw and heard this day.

A great poet is dying

He doesn't say it

but he is dying.